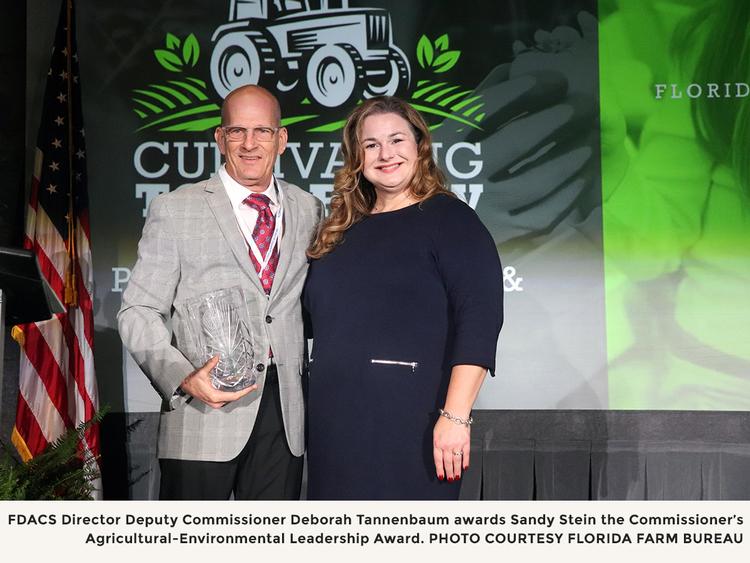 You’ve long known former FNGLA President Sandy Stein as a leader who promotes the green industry as a green industry. We at the University of Florida’s Institute of Food and Agricultural Sciences wanted others to know, too.

UF/IFAS nominated Sandy for the Florida Department of Agriculture and Consumer Services commissioner’s Agricultural-Environmental Leadership Award in part because he’s an important leader in the movement to have policymakers – and producers themselves – recognize farms, forests, nurseries and ranches as sources of climate solutions. Without this leadership and this movement, you could expect more blame for climate change to be heaped on you.

UF/IFAS long ago recognized Sandy’s leadership potential when we accepted him into our Wedgworth Leadership Institute for Agriculture and Natural Resources. So he came to mind immediately a few years ago when we were seeking agricultural producer-leaders across the state for an alliance that became the Florida Climate Smart Agriculture Work Group.

Sandy has been an active member. This producer-led discussion has evolved into a movement to incentivize farmers to do more of what helps the planet —sequestering carbon, protecting wildlife, hosting pollinators, filtering water, and preventing floods.

Few of you get paid for any of this. If policymakers and the public want more of it, then we need policies allowing you to “sell” these things just like you sell flowers, trees, shrubs and sod.

Sandy has not only been an important voice in this movement (which UF/IFAS supports by hosting the group meetings and providing technical expertise), but he has been vocal about raising awareness of existing incentives.

Yes, there are some. It’s a disjointed patchwork of cost-share programs, easements and pilot projects among federal, state, regional and local agencies. Sandy advocates for a central clearinghouse you could consult to identify the full range of opportunities to do more of what you already do to provide the public goods we call ecosystems services.

As a producer, you know you’re a steward of the environment on which you depend for your livelihood.

Take Sandy’s Jungle Nursery in Homestead, where he grows interior foliage. Sandy applies beneficial bugs instead of pesticides to his plants, uses controlled release fertilizers and engages in other environmentally friendly practices. He does this without government incentives in pursuit of his own vision of environmental stewardship.

You’ve been taking care of the land for generations, and UF/IFAS has been helping you do it with the science behind reducing inputs, developing Florida-friendly crop varieties, managing nutrients for less runoff and leaching, and maintaining soil health. Now there’s a need for the science of sequestering carbon.

Our nomination of Sandy and the recognition of him at the Florida Farm Bureau annual convention in October are important signals that agricultural producers can deliver climate solutions. Sandy is among those leading the way for farmers to protect both profit and planet. The future of farming—and Florida—depends on it.

Scott Angle is the University of Florida’s Senior Vice President for Agriculture and Natural Resources and leader of the UF Institute of Food and Agricultural Sciences (UF/IFAS).