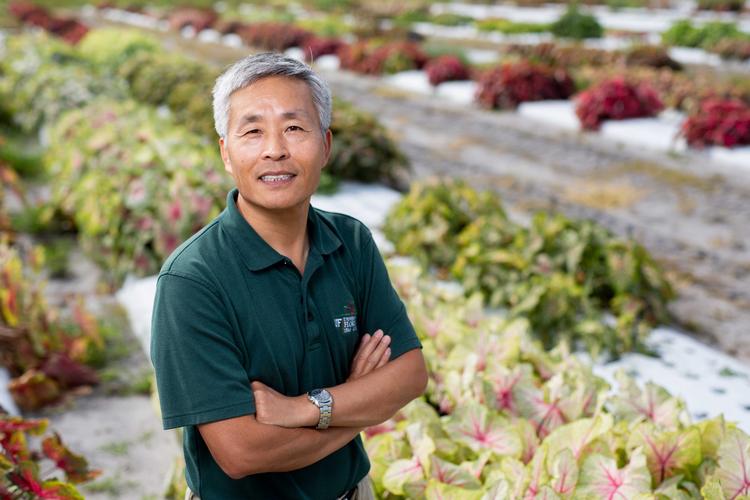 I recently visited a UF/IFAS research center and got an eyeful of innovation.

Zhanao Deng of the UF/IFAS Environmental Horticulture Department, pictured above, had arranged an array of beauties, 20 caladiums from his greenhouse at the Gulf Coast Research and Education Center. They are new cultivars for nurseries, garden centers, landscape firms and gardeners.

It’s the closest Zhanao ever comes to self-promotion. And it works. I’m still carrying images in my mind of his creations with names like Garden White, Cosmic Delight, and Seafoam Pink, and they remind me of Zhanao.

I suspect some of you at FNGLA may think of him a lot, too. Your support for his work has been important in his development as one of the premier nursery plant breeders in the nation.

He has great support from colleagues, too. People like Sandy Wilson and Gary Knox love collaborating with him. They had to go behind his back because they knew he’d object to them (successfully) nominating him as a fellow of the American Society of Horticultural Science.

Ben Bolusky has told me about at least four FNGLA research grants to Zhanao. I don’t recall the amounts, and I don’t need to. The important thing is the grants signal support and priorities validate the relevancy of his work. After all, he’s not breeding just to impress me. He’s creating the plants you grow and sell at your nurseries.

You know Zhanao best as creator of caladiums, sire of sterile lantana. In other commodities, we’ve paired experienced traditional breeders with scientists who specialize in the use of the tools of biotechnology. In Zhanao’s case, we appear to have both wrapped up in one.

Zhanao uses molecular markers, genetic linkage maps, ploidy manipulation and more to get to the right colors, shapes and patterns which make attractive plants. One fellow scientist remembered visiting with a cousin, who has nursery in Cincinnati, who told him his best-selling lantanas are “Bloomify Rose” and “Bloomify Red,” two of Zhanao’s creations.

He’s not just old-school/new-school versatile. He’s among the few nursery plant breeders who cross over to food crops. (Don’t worry, he always crosses back to ornamentals.)

When we announced in October that a team led by citrus breeder Fred Gmitter at our Citrus Research and Education Center had sequenced the genome of trifoliate orange, an important milestone in their quest to develop a citrus greening-tolerant citrus tree, there was Zhanao again.

Zhanao is also working on developing blackberry cultivars which can be commercially grown in Florida. He’s trying to follow the path of blueberry pioneers whose cultivars took a crop from nothing to an $80 million-a-year industry on nearly 1,000 farms in Florida.

Another measure of his versatility is his dedication to all three branches of the land-grant mission. In addition to his work in the lab, he’s among a cadre who hope to launch a Ph.D. program in plant breeding next fall. He frequently presents his work at field days and other Extension activities.

He also invites visitors to tour the hops garden he helped create at Gulf Coast REC. 3 Daughters Brewing in St. Petersburg has used Zhanao’s hops in several limited-release batches, including one he brought to a UF/IFAS event which was labeled “Deng Good Beer.”

Zhanao, if you’re reading this, that would be a great item for display for my next visit to Gulf Coast REC. It won’t last nearly as long as a Cosmic Delight. But you can bet I’ll toast your skill and productivity as I do a little “quality control” on the product.

As a scientist of aesthetics, Zhanao understands the advantage he has as an ambassador for science and agriculture and the storytelling power of a houseplant. For me, this story now includes the thrill from getting the glimpse Zhanao gave me of the future of Florida agriculture.