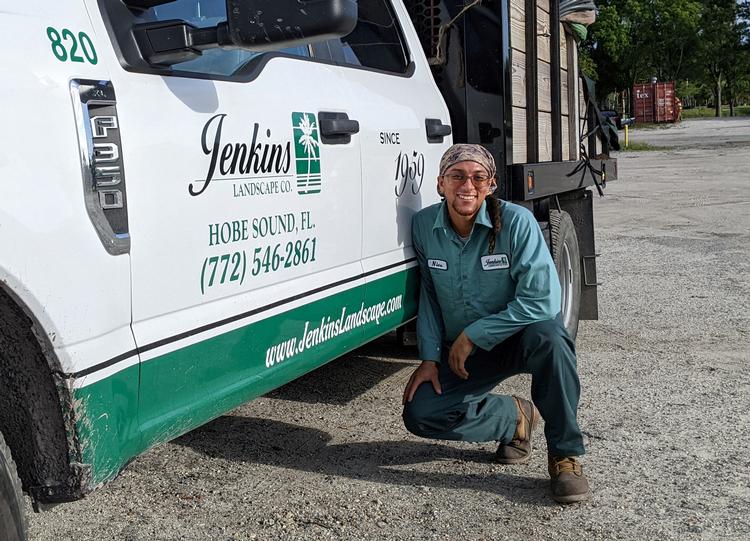 It’s been more than a year since Nicolas 'Nico' Robinson became FNGLA’s first Irrigation Technician Apprentice at Jenkins Landscape, in Hobe Sound. Since then, he has proven his worth over and over, says supervisor David Benc.

Yet, Benc almost didn't interview him. “This was during a time when we really needed someone with at least a little irrigation experience for the jobs we had coming up. With no irrigation experience on Nico's resume, it was almost set aside,” David recalls. “I guess it was meant to be because we interviewed him and felt he was right for the position - and he has proven that since June of 2021.”

Robinson found his way into the industry through a well-respected company -- and FNGLA's Apprenticeship program. “I was interested in Jenkins Landscape because the company does high end work that I would not otherwise be able to be a part of,” he explains. “Couple that with the amazing staff and managers, and it was a no brainer.”

As an apprentice, Nico aims to absorb as much knowledge as possible on his way to becoming an irrigation professional. And the opportunities are endless for someone in irrigation, explains Benc.

“Sure, the proving grounds are in the irrigation trenches– and everyone starts there,” he says. “Be a sponge and learn all you can on the job and at classes.”

When asked what a typical day is like, both gentlemen kind of chuckle. While on any given day the plan may be for on-the-job training in irrigation system installation, suddenly there is a reported line break, so the OJT for that day switches over to irrigation system repair. But, by the end of the apprenticeship, Robinson will be introduced to all areas of irrigation, which is what keeps him interested every day.

“I would absolutely recommend apprenticeship to anybody who is eager to begin or grow their career in the industry with an active, hands-on learning experience,” he exclaims.

Benc is impressed how Nico gets along with everyone he works with and has learned much from his current crew. The goal is for him to have his own crew once his apprenticeship is complete by mid-2023. Then, the sky's the limit for this apprentice-turned-journeyworker.