Florida Ag Hall of Fame by writing that some of us in academia were surprised to be approached about Robbie. We had assumed he had long since been inducted!"/> 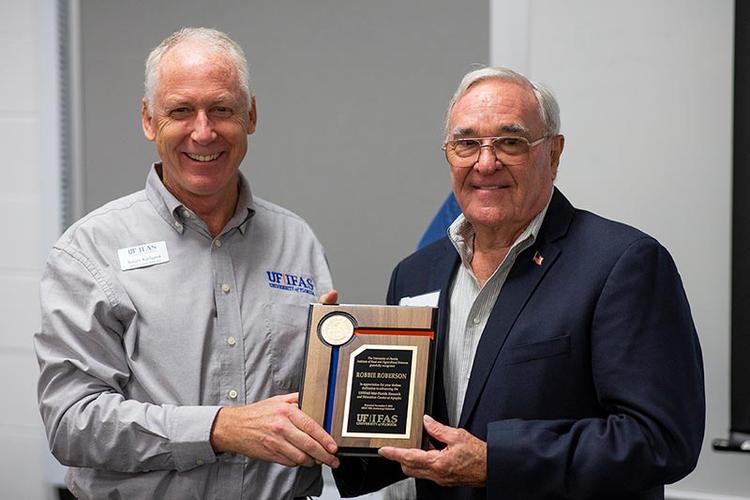 Jack Payne: Robbie Roberson is a figure of historic importance

I started my letter nominating Robbie Roberson as a candidate for the Florida Ag Hall of Fame by writing that some of us in academia were surprised to be approached about Robbie. We had assumed he had long since been inducted!

Roberson is a figure of historic importance among supporters of the University of Florida's Institute of Food and Agricultural Sciences. He played a pivotal role in the creation of the UF/IFAS Mid-Florida Research and Education Center (MREC). He led efforts to secure more than $12 million in funding from the state and $1 million each from the city of Apopka and Orange County to build the center.

MREC has evolved to become the hub of science supporting the state’s nursery industry. When we celebrated the 50th anniversary of the MREC last year, there was only one person there who had been through all 50 years. The plaque we gave Robbie that day was insufficient appreciation for all he had done, so I was glad for the opportunity to give a push to his nomination for the Hall of Fame.

Robbie’s commitment to the land-grant mission was evident in his service as a CARET (Council for Agricultural Research, Extension, and Teaching) delegate on behalf of UF/IFAS. He has been among the most important spokesmen for agriculture and agricultural science as a delegate seeking congressional funding for Florida.

Roberson has played political defense as well. When a county commission threatened to impose a tax on impermeable surfaces to fund retention ponds, it alarmed an industry with so many acres of potentially taxable greenhouses. Those who were at the meeting say Roberson was able to explain the stakes without antagonizing the commission. His argument to exempt and protect the industry won the day.

Since MREC was built, Roberson has been an invaluable source of advice and counsel to those who have led the center. Former center director Wayne McKay says he relied on Roberson to introduce him to other people in the green industry and to share the industry’s history. Roberson has long served on the center’s advisory committee. His personal relationships with legislators and political wisdom make him invaluable to those at UF/IFAS and the green industry who navigate the public policy realm.

This has come in especially handy in advising the university whom to appoint as leader of UF/IFAS. He served on the search committees which helped bring my predecessors Mike Martin and Jimmy Cheek to UF/IFAS as its chief executives.

Roberson’s stature not just in the green industry but in Florida agriculture led UF/IFAS to include him as a member of the Florida Agricultural Council, a body of industry leaders who advise UF/IFAS on the fulfillment of the land-grant mission.

This is just some of what he’s done for UF/IFAS. In this space, I don’t need to go into his long service to FNGLA.

I look forward to being there in February when Florida’s agricultural community corrects a glaring omission in its Hall of Fame roster. With our 50th anniversary event in Apopka last year, we at UF/IFAS recognized how valuable it is to mark our history with those who helped us make it. At Robbie’s induction ceremony next year, a who’s who of Florida agriculture will get to do the same. Congratulations, Robbie, and thanks for all you’ve done for UF/IFAS and Florida agriculture.